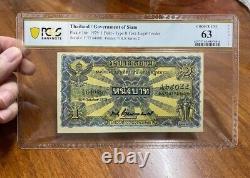 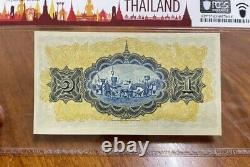 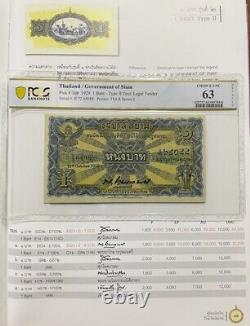 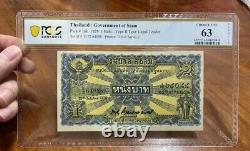 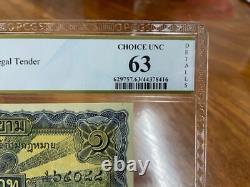 1926 UNC 63 PCGS Currency Thailand Banknotes Precious Siam King Rama VI Rare New. Banknotes in circulation, Rama VI era. His Majesty King Vajiravudh Phra Mongkut Klao Chao Yu Hua His Highness ascended the throne on 11 November 1910. At the beginning of his reign, the Type 1 banknotes that had been printed since his reign were still used, including those added to his reign. When the change of the new reign and the Type 1 banknotes are almost exhausted, the Ministry of Finance has decided to change the new banknotes. Therefore, it was prepared to select several banknote printing companies and finally agreed to hire Thomas de la Rue. England is a banknote printer. The Type 2 banknotes are special than the Type 1 banknotes in that they are printed with embossed lines which make them difficult to counterfeit. And also add a pattern printing on the back of the banknote as well, but this type 2 banknote has no watermarks in the paper.

His Majesty the King had the idea that the Royal Plowing Ceremony to Phra Nang Kla Rak Na Khwan was an important royal ceremony that represented the good trade and culture of Thailand. Therefore, he has chosen to be the picture on the back of the banknote. People often call this type 2 banknotes as plowing banknotes. Type 2 banknotes come in 6 denominations: 1 baht, 5 baht, 10 baht, 20 baht, 100 baht and 1000 baht.

"Promise to pay to the person who brought this banknote into Siamese currency", which is in accordance with the Siamese Banknote Act of 1903 which stipulated that banknotes could be converted into metal currency. Subsequently, a law was issued to allow 100% of the reserves to be invested. Therefore, a temporary additional currency act was issued in 1918 to refrain from paying foreign currency to the leaders who asked for a raise. Even during that, the banknotes in circulation will have a message. Until 1928, the Currency Act was promulgated.

Requires the country's currency to consist of banknotes and coins. Therefore, banknotes are the currency that legal debts can be paid. It is not a promissory note as it used to be. Please look at all my photographs, They are a major part of the description.

Th ere may by a delay due to the global COVID situation. Feedback is very important to us. BEFORE you give us or feedback. Please don't forget to leave us a feedback. We strive to make you our customer happy.

We are pround to offer you the best products from Thailand. This item is in the category "Coins & Paper Money\Paper Money: World\Asia\Thailand". The seller is "star-shop19" and is located in this country: TH. This item can be shipped worldwide.